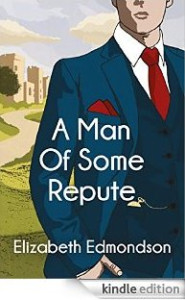 I picked A Man of Some Repute as my free Kindle book of the month. Why had I never heard of Elizabeth Edmondson? Here’s someone producing well written, unpretentious, enjoyable novels. Because the books are neither sensational nor ‘literary’, they depend on self publicity by the author and word of mouth by readers to get read at all. As you will have gathered, I loved A Very English Mystery Book One. It reminded me of James Runcie’s Sidney Chambers books.

One winter’s night in 1947 (the worst winter of the last century), the Earl of Selchester leaves his family and house guests and apparently walks out into the blizzard, never to be seen again. Move forward to 1953. Lord Selchester is still missing and his unpopular daughter Sonia waits impatiently for him to be declared dead so that she can inherit the castle and ‘lots of lovely money’. The castle and the nearby Hall were used during the war for ‘statistical research’, which everyone in Selchester knows means secret service stuff. Sonia’s cousin Freya, who still lives in the castle, is informed that a new worker at the Hall is to be billeted on them. Enter Hugo and his schoolgirl sister, Georgia.

No one knows what Hugo did in the war, nor that the leg injury which has restricted him to a desk job was received while working in the field for the Service. He’s pretty fed up, what with the pain in his leg and being banished to the provinces, as he sees it. His work at the Hall is to seek out traitors, in the wake of the Burgess/Maclean defections. Before long he has another, unofficial role seeking out the murderer/s of Lord Selchester, assisted by Freya, precocious Georgia and wise Uncle Leo, who is a priest. Could the two investigations be linked? This is a perfect set-up: country house murder with added spy interest, just the thing to please me.

The post-war atmosphere is completely believable, the citizens of Selchester as gossipy as you’d expect and everyone at the castle, likeable. By the end of the book two mysteries have been solved but there are several loose ends and a new, surprising twist. Elizabeth Edmondson writes, ‘My aim is to enthral, delight and amuse readers as they are transported to a different era.’ She succeeds for this reader, and I look forward to the second book in the series, which will be out in October. It’s for you if you fancy a book with ‘a touch of Downton Abbey, a whisper of Agatha Christie and a nod to Le Carré’
Collapse