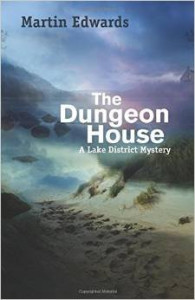 I’ve been reading a lot of Martin Edwards recently; not the novels but his excellent introductions to the British Library Crime Classics series. I’m looking forward to reading The Golden Age of Murder, which I intend to get hold of ASAP.

A while ago, I tried one of his Lakeland Mystery series because the books were so highly recommended by other people. For some reason, I just couldn’t get on with it; perhaps I randomly picked the least good one. No such problem with The Dungeon House, which I’ve just read courtesy of NetGalley. It’s not out until September, so existing fans will have to possess their souls in patience until then.

The Dungeon House is occupied by the Whiteley family. Twenty years before this story starts, a tragedy wiped out three family members; a case considered closed. When two young women, both with connections to the family, disappear in the same area, Hannah Scarlett, head of a Cold Case unit, starts to wonder if there are connections. Much of the plot revolves around Joanna, a forty-ish woman who has been very damaged by events in her life, one of which was her link to the Dungeon House murders. Just how much does she know? Has she blocked out some terrible memories? When she sees on the news that the daughter of an old flame has gone missing from the Dungeon House (now renamed), she decides to take a holiday, back to her old haunts. Unluckily for her, this stirs up old memories in people she once knew, none of whom seems pleased to see her.

The unravelling of the two cases is fascinating and, at the end, very dramatic. Hannah is likeable, the police procedure interesting and the whole book a nicely wrapped up detective mystery. Recommended.
Collapse