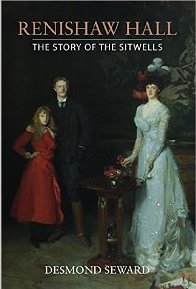 When one thinks of the Sitwells of Renishaw Hall, ‘The Trio’ of Edith, Osbert and Sacheverell come first to mind. This book puts the record straight by showing how generations have made their mark on the place since 1625. Unsurprisingly, little is known about these early Sitwells and Sacheverells and their story takes up less than half the book. Nevertheless, they sound an interesting lot. Renishaw is an odd place: a great country house with a coal mine virtually at its gates. Perhaps that’s what gives the house a strangely dark and sinister look from the front. Inside, it’s extremely grand.

The story here really begins with Sir George Sitwell and his three children. Anyone with an interest in gardening knows of his book On the making of Gardens. His landscaping skills are responsible for the beauty of the gardens today. He also made a lovely garden in Italy. Poor Sir George was quite unfairly belittled and despised by his children, especially Osbert, who turned his five volume autobiography into a hate-fest for his unfortunate father. It’s good to see Sir George rehabilitated here as the intelligent man he really was.

Naturally, the artistic achievements of The Trio (such as they were) are dealt with in some detail: Edith’s poetry, Osbert’s writing, the feud with Bloomsbury, their patronage of the arts. They really were important figures after the First World War although today probably only Edith’s poems are considered worth reading. Osbert comes out of this as quite an unpleasant figure and a very vain one. How on earth could he have thought his writing equal to Evelyn Waugh’s? Waugh didn’t quarrel with him over it though because, like so many artistic figures of the time (Rex Whistler, for instance), he loved to visit Renishaw. Some of the greatest treasures at Renishaw are examples of the many paintings of the house and grounds by John Piper. Renishaw Hall is lavishly illustrated and includes reproductions of some of Piper’s striking work. Osbert commissioned his paintings and the author’s conclusion is that his greatest artistic achievement was his patronage of Piper, William Walton and others.

An interesting book, which I enjoyed, although a family tree would have been useful. My thanks to Elliott and Thompson for sending me a copy.
Collapse