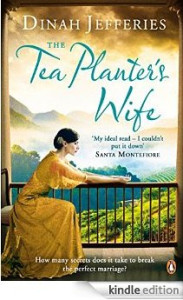 Penguin Books obviously have high hopes of this novel, as advance copies seem to be flying around. I read mine on the Kindle, courtesy of NetGalley.

The Tea Planter’s Wife is set in Ceylon (as Sri Lanka then was) during the 1920s and 30s. It’s a time of unrest: conflict between the Sinhalese and Tamil populations; new ideas circulating as a result of Gandhi’s activities in India. It’s a last hurrah for the British colonial employers, but few of them realise it. Just nineteen years old, Gwen travels from England to join her much older tea planter husband on his estate. There’s a touch of A Passage to India here: naïve young white woman travels east, not understanding the relationship between whites and ‘natives’ and expecting to be able to make a difference. As soon as she arrives, she notices changes in the Laurence she adored back home and Laurence in his own milieu.

It’s a book about secrets. There’s a mystery about the deaths of Laurence’s first wife and their son, which no one will tell Gwen about. Then she herself has what seems a terrible secret to conceal from her husband. Neither mystery is resolved until the end of the book. For me, the chief weakness in the novel is the character of Gwen herself. She’s very pretty, she loves her husband, she has ideas about being kind to the servants, she conceals her secret for as long as possible. But that’s all we know about her; somehow she lacks an inner life. What lifts the book is the descriptions of the country, of plantation life and the people there. Even better is the hate figure of Laurence’s possessive, malicious sister Verity. She’s so awful that you keep wondering what dreadful thing she will do next to wreck her brother’s marriage and generally make trouble for everyone.

I read the book quickly and enjoyed it. It’s light yet quite haunting and deals with an unusual subject.
Collapse