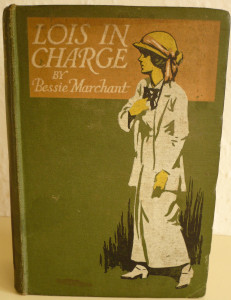 It’s ages since I read anything by the prolific Bessie Marchant, famed for giving her heroines a hard time in exotic locations. In this book, Lois lives on a coffee plantation in Brazil. From the start it’s difficult to work out all the complications of her family with its half sisters and a stepbrother who really isn’t. A friend tells Lois that she’s never known such a muddled up family. I eventually worked it out like this. Mrs Scarsdale had a son, Jim, and another child who died at the same time as his father. She then married Mr Murray and they had three beautiful daughters. When she died, leaving her girls very well off, Mr Murray married the governess and Lois is their daughter. It’s heavily pointed out several times that Jim is ‘no kin at all’ to Lois, and you can guess why.

Unlike her sisters, Lois is not beautiful (they call her Cinderella) and she knows she’s not very clever, either. She is however very practical and quite a feminist because she wants to work (this book dates from 1919). She’s annoyed by Jim’s critical attitude to her working on the ranch and seeming to want women to be merely ornamental. ‘She tried to imagine a world peopled only by ornamental women, but failed so utterly that she had to fall back on the other side of the picture, and imagine for herself what the world would be like if every girl and woman lived up to the capacity within her, and tried to do her very best in the situation in which she had been placed. But the situation was too Utopian even for the fertile fancy of Lois;’

All is not well amongst the coffee growers because of the evil Black Hand Gang, which blackmails ranch owners into handing over considerable sums of dosh and killing them if they don’t oblige. Jim has his own ranch up river from the Murray’s and suddenly disappears. Lois, who has helped her father for so long that she knows a lot about plantation work, steps into the breach and starts to tackle the manager, whose cruelty to the workers appals her. She finds that Jim has had a warning letter from the gang, which explains his disappearance. She is convinced he is alive but fails to see what is blindingly obvious to the reader but which I won’t reveal. If you can look beyond some of the racial attitudes and snobbery in this book, it’s rather a good read about the triumph of hard work and common sense over idleness and frivolity.
Collapse