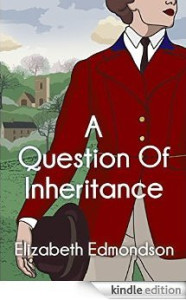 I loved the first Very English Mystery Book , A Man of Some Repute, so I was delighted to find the second one was available from NetGalley. As soon as the story moved to the castle, I felt at home and among friends. I do love series (Daisy Dalrymple, Sidney Chambers) where each book contains a new mystery but at the same time follows the characters’ lives chronologically.

A Man of Some Repute ended with the Earl of Selchester’s mysterious disappearance explained and a hint that the inheritance of the castle might not be as straightforward as it had seemed. A Question of Inheritance opens with the current earl and his daughters travelling to their new home. He’s American, a scholar, and thoroughly nice, yet a series of potentially fatal ‘accidents’ suggest that someone has it in for him. Money-grubbing Sonia is also on her way to the castle, hoping to bag for herself some pictures which have been stored in an attic and never included in an inventory. Hugo has a new job investigating the possible involvement of an English officer in getting works of art out of Europe at the end of the war, as part of a deal getting new identities for former Nazis. A nasty, immoral business but is it connected to the castle? A murder gets Hugo, Freya and Georgia sleuthing again and Hugo has need of his old contacts and remembered tradecraft.

We’re not talking John le Carré here; I’m not suggesting these are very serious books about spies but the author makes the whole post-war atmosphere very convincing and a culture shock for the Americans. I couldn’t wait to start this book and read it far too quickly. Luckily, I see no reason why this series shouldn’t run and run. There are obviously more unpleasant things to be discovered about the late earl and have Hugo’s unorthodox investigations lost him his job? I can’t wait to find out.

The book is out at the end of October. Many thanks to NetGalley for giving me the chance to read it early.
Collapse