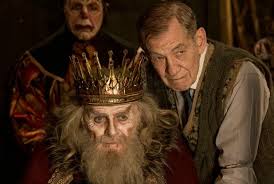 Photo BBC. Edward Fox unrecognisable as the Fool. He was also in the 1983 film .

I still have strong memories of the original film of The Dresser, which starred Albert Finney and Tom Courtenay, so my expectations of this production were high.

Ronald Harwood’s play is about a touring theatre company run by ‘Sir’ putting on King Lear in wartime, while air raid sirens go off. ‘Sir’, an ageing ham, seems unfit for the performance and is cajoled and bullied onto the stage by his long-time dresser, Norman. So there’s a play within a play, Lear inside The Dresser. The BBC production (by Richard Eyre) was lovely to look at: beautiful photography, perfect costumes and atmosphere. It was very stagey: a play filmed for television rather than a television play.

I have to say that Ian McKellen stole the show with his nervy, fidgety, vulnerable yet at times cruel performance as Norman. Anthony Hopkins somehow failed to shine as ‘Sir’. I did find myself in tears at the end, but that was due to Lear. Top quality TV and what we pay the licence fee for.
Collapse