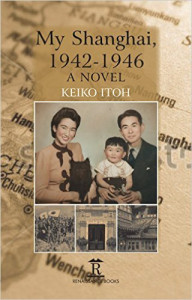 It’s hard for the British, with all their war myths, to imagine being on the losing side in a world war. Even harder to imagine loving your country while disapproving of the actions of the government. My Shanghai is written in diary form by Eiko, a beautiful young Christian Japanese woman raised and educated in England, where her father was a respected banker. She is married very young to the older, enigmatic Hiro and in 1942 they join the Japanese population of Shanghai. By that time there were 100,000 Japanese people in ‘the Paris of the Orient’ and the city was very cosmopolitan. Eiko has been brought up by her father to have liberal views and to mix happily with people of all races and religions. In Shanghai she soon makes friends amongst the Quakers as well as the Chinese and her fellow Japanese. The diary form of the book actually creates tension; Eiko’s first entries are so innocent but the reader knows what is to come.

The first bad news to hit is that ‘Daddy’, at first under house arrest in London, is interned on the Isle of Man. Then Japan’s alliance with Germany changes attitudes to the many Jewish refugees in Shanghai and they are moved to ‘designated areas’. Poor Eiko. Back in London she had ‘never thought about people being Jewish or not.’ She is especially worried about Irma, her friend and a tireless worker for the refugees. Her Quaker friends become ‘enemy aliens’. First they have to wear distinguishing armbands, then they are sent to internment camps. She gets fond of a young Chinese man to whom she’s been giving English lessons but he disappears, almost certainly to join the Communists. The young son of another friend is so brainwashed at school that he can’t wait to be a pilot in the service of his country. Things get worse and worse. There are food and fuel shortages because all resources must be devoted to the service of Japan. ‘Foreign’ words are banned, as are smart clothes. Japanese women must now dress like peasants.

Shanghai is an occupied city but there are divisions amongst the Chinese, between those who support the Nationalists (the Kuomintang) and those who think they are corrupt and that Communism is the answer. Small wonder that most people keep their heads down and are cautious about what they say in public. Whatever happens, Eiko manages to keep her husband and two little boys happy while running an efficient household with the help of loyal Chinese servants. When the tide starts to turn against Japan Eiko is saddened by news of the ‘heroic’ Kamikaze pilots, regretting the waste of young lives, disliking the military authority for its willingness to sacrifice the young and longing for a negotiated peace. After Japan’s surrender, the tables are truly turned. Brutal Japanese soldiers strutting about insulting the Chinese are replaced by impossibly tall and healthy looking Americans. Eiko’s family has been forced to move several times; first to make way for the Japanese military, eventually being herded into a designated area, just as the Jews had been. A far cry from the privileged luxury Eiko has been used to, yet she never gives up. Eventually the family is repatriated to Japan and the story ends.

Keiko Itoh has written this book as fiction, based on the experiences of her own mother and aunt. Yet it reads like history and I learned an awful lot from it about what it must have been like to live through those times, in that place. Many thanks to the publishers, Renaissance Books, for sending me a copy of such an interesting book, so atmospherically describing a city in turmoil and its unfortunate inhabitants, caught up in ‘interesting times’.
Collapse