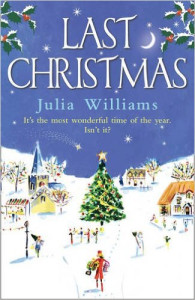 I picked this up a while ago for about 50p simply because it had Christmas in the title and glitter on the cover. How we fall for publishers’ ploys sometimes. It was the Christmas book I had the lowest expectations of yet I preferred it to the Trisha Ashley offering I’d just read.

Each of the characters has a problem to be solved before the book’s end. Marianne, in the impossibly named village of Hope Christmas, is nursing a broken heart. Local farmer Gabriel is trying to bring up a young son alone, after they were deserted by beautiful but flaky Eve. Meanwhile, in London, Cat is juggling work and a houseful of children, with a useless au pair and a husband she hardly talks to. Said husband, Noel, a clever engineer, knows his job is on the line because he doesn’t do enough brown nosing, the recession is on and the building industry struggling. Cat once started a blog called Happy Homemaker. It was meant to be an ironic take on life as a wife and mother but people took it seriously and it led to a career which included writing for a glossy magazine. In her present state, the whole thing seems a ridiculous sham.

The pretty village of Hope Christmas is at the heart of the book and it’s straight out of Ashley-land: thriving shops and small industries, community spirit, everyone knowing your business. Actually never-never-land but never mind. Things start to go wrong when news comes that the village is to lose its Post Office and get worse when a development company plan an eco village, right on the flood plain. This is where Noel gets involved as he’s sent up to Shropshire to work on the project. He sees at once that it’s not feasible but knows that if he says so he’ll lose his job. He’s right on both counts and the village suffers its first bad flooding for a hundred years.

This is all very topical and also quite realistic. Can things work out so that everyone eventually has a happy Christmas? What I liked best about this book is that there’s an angel in it, so you can guess the answer to the question.

After reading this I noted that Last Christmas was published in 2009 and that Julia Williams has cannily written several other books with a Christmas theme. I also found three short stories available free for the Kindle: Dad’s Christmas Wish, Granny’s Christmas Wish and My Christmas Wish. These are just tasters because 50% of each Kindle offering (yes, I read them), is an extract from a full length novel: Make a Christmas Wish!, described as a ‘hilarious and just-a-little-heartbreaking festive treat.’ As the wishes in the extracts were all about death and grief, I’m not tempted by this one. Last Christmas, though, is a pleasant light Christmas read. Superior chicklit.
Collapse