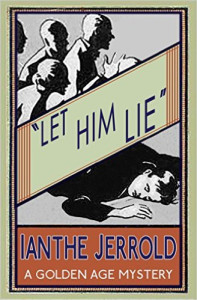 Dean Street Press very kindly sent me another of their re-issued golden age of crime books: Let Him Lie by Ianthe Jerrold. An author previously unknown to me who obviously wrote light but very engaging crime fiction.

The story is set in a country house and the local village. Robert Molyneux, owner of the house, is warned that if he excavates a local antiquity known as Grim’s Grave, dire consequences will follow. Molyneux is shot dead while pruning trees in his orchard. The plot is quite technical, as the solution lies in discovering exactly from which angle he was shot and therefore who might have been in a position to do the dirty deed. There are plenty of suspects.

There happened to be lot of people around the house that day. Molyneux’s wife Agnes discovers the body. She seems overcome with shock but is a selfish and calculating woman with secrets in her past. Fone, a local antiquarian who is strongly opposed to the excavation, was in the house and had a clear view of the victim falling from his ladder. He also had access to guns kept in the house. There’s a former secretary who may bear a grudge, a neurotic governess who was in love with Molyneux but kindly rejected by him and Fone’s secretary and factotum, who owed money to the dead man. I expect I’ve left someone out!

There is a detective on the case but it’s solved by Jeanie, a young artist living in a cottage on the estate. She moved there to be near Agnes, to whom she was once devoted. She is now greatly disillusioned and sees the woman’s true character. She doesn’t search for clues and go around asking questions; rather she is intelligent, observant and capable of putting two and two together. As the book reaches its conclusion, Jeanie is in great danger and it all gets quite exciting.

I think it’s great that out of print books like this are being made available again and each only costs 99p to buy for the Kindle. I now have another to read, by Robin Forsythe, and I’m looking forward to it. So far, E R Punshon is my favourite discovery.

It makes me cry but I still want to listen to it. When it’s out, all the money will go to cancer charities.

I really don't like prog rock, so the stuff Rick Wakeman did with Yes doesn't interest me at all. But he's a brilliant pianist and I find this version of Life On Mars very moving.
Collapse