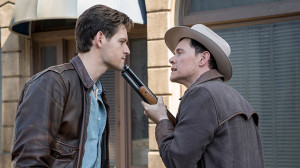 I’ve now binged on all ten episodes of the first season of The Man in the High Castle. It was quite a treat; beautifully shot and acted. For those who don’t yet know, this series is based (loosely, they say), on the novel by Philip K Dick. We’re in a dystopian 1962 in which the Axis powers have won the war. The United States is divided into Nazi and Japanese zones, plus a so-called neutral zone. The eponymous MINTHC is collecting films which look like old newsreels and show an alternative ending to the war. People die to get hold of these films and pass them on, to either the resistance or those in power.

One of the unsettling things about the series is the lack of black and white morality. You’d think: Nazis and Japs = bad; resistance fighters = good. In fact, some of the Nazi and Japanese officials become quite sympathetic characters while the resistance people are either as ruthless as those they oppose or, unfortunately, dead boring. The heroine, Juliana, is passed one of the films by her sister, who is then shot. Dear Jules feels she has to pass the film on again, no matter who gets hurt in the process. The chief victim is her boyfriend Frank, who is so dull that you can’t imagine what Juliana sees in him or care very much what happens to him. Then there’s mysterious Joe Blake (seen above, no hat), a Nazi agent. Or is he? We still don’t know for sure by the end. Loyalty, trust and honour are hard to find.

For me, the stand-out performance of the entire series was by Burn Gorman (above, with hat). Now you can all shout at me for not knowing already what a good actor he is but I’ve never watched Torchwood, Game of Thrones or anything else he’s been in. He plays a gun-toting character known as The Marshall, who is a psychopathic nutter. Although he only appears in two episodes, I found images from the scenes he was in impossible to get out of my head.

I don’t think this series could have been made if Twin Peaks and The X-Files hadn’t come first. This is for people who don’t mind watching a film which has them wondering what on earth is going on. I now want to read the book.
Collapse