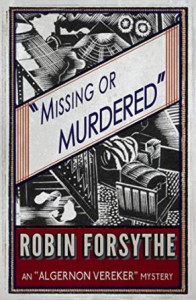 The man who is either missing or murdered is Lord Bygrave, a wealthy, highly respected official at an unnamed Ministry. One evening he leaves London for the country, spends the night at an inn and next day vanishes, leaving his traps behind in his room. Detective-Inspector Heather of Scotland Yard is on the case but so is ‘Algernon’ Vereker. Eccentric, whimsical Vereker is an artist who obviously has means enough not to rely on painting for a living. He also happens to be a close friend of Bygrave and his executor. The plot unfolds in a leisurely fashion, with Vereker and Heather sparring pleasantly with each other while each hopes to be the first to solve the case.

As there’s no body in the case, it seems impossible to know whether Bygrave has gone missing for reasons of his own or has met with an accident or worse. There are a few obvious suspects, chiefly the nephew who inherits the estate. What about Bygrave’s secretary, rather a cad and with debts? Who is the mystery woman to whom Bygrave apparently made over £10,000 six months before his disappearance? In this case, nothing is straightforward but Heather and Vereker do eventually come to a similar conclusion and solve the mystery.

Missing or Murdered is another offering from Dean Street Press, who kindly sent me a copy of the book to read. They’ve brought out five Vereker mysteries. I really fancy reading The Ginger Cat Mystery for the title alone. A curious fact about the author is that he was himself a civil servant, working at Somerset House, who was sent to prison for a fraud he was involved in there. How many crime writers have a criminal record, I wonder?

I've been sent a voucher for a free Kindle book. I was thinking of getting one by Elizabeth Edmondson but don't know which to choose.
Any particular favourites? I've already read Finding Philippe and the Very English Mysteries.

Edit. Bleh. You can only choose from a shortlist of bad books. Heigh ho.
Collapse