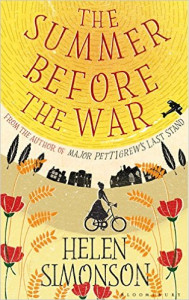 The Summer Before the War is set in Rye, that charming Sussex coastal town which features so often in fiction. There’s a well established community with a great distrust of incomers. One of the latter is Beatrice. Used to having money, responsibility and respect while travelling with her father, since his death she has become penniless. Highly educated, independent-minded, she is offered the post of Latin teacher at the grammar school in Rye, thanks to the support of two women who sit on the Board of Governors.

Beatrice is introduced to the town by her patroness ‘Aunt Agatha’. She is the slightly eccentric aunt of Hugh and Daniel, active in town matters and constantly trying to get one over ghastly Mrs Fothergill the Mayor’s wife. Her husband, Uncle John, is one of the nicest characters in the book. He’s rarely at home in Rye because his important work at the Foreign Office keeps him in London. Hugh is a trainee surgeon, highly thought of by the surgeon he works under. Ambitious, he imagines himself marrying his superior’s daughter and having a Harley Street practice. His cousin Daniel is his opposite in character: a little wild, madly attractive, hoping to be a successful poet.

It’s 1914. The townspeople first refuse to believe a war possible, then become wildly enthusiastic, welcoming Belgian refugees, enjoying triumphalist parades and organising committees. A year later, everything has changed as the realities of war come home with the casualty lists.

Rye is beautifully described, the characters well defined, their fates a matter of concern. If I have a criticism of the book it’s that there are too many themes: the independence of women; attitudes to illegitimacy and to homosexuality; small town politics; the effects of war on individuals and the town community. It’s also impossible to escape the dead hand of E F Benson and his depiction of Rye as Tilling. Reading of a large car in the narrow street, you can’t help thinking of the Wyses. The famous writer living in what is obviously Lamb House is called Mr Tillingham. The spats between Aunt Agatha and Mrs Fothergill are comparable with those between Mapp and Lucia. There’s even a Quaint Irene character, Miss Finch. This is all amusing but perhaps distracts attention from the main theme: the futures of Beatrice, Hugh and Daniel. A good book but a little overambitious.

I read this book courtesy of Random House via NetGalley.
Helen Simonson is the author of Major Pettigrew’s Last Stand, which I reviewed here.
( Collapse )
Collapse