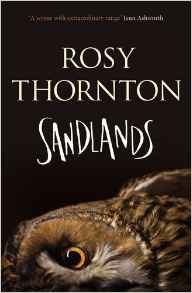 Short stories are not very fashionable; I’m often disappointed myself to find that a book by a favourite author is not after all a novel. Yet it takes a very special skill to write something small yet complete in itself; the essence of a life or a series of events. The stories in Sandlands are linked by their setting: the Suffolk countryside. If you’re sharp eyed enough, you’ll notice some of the same places and people popping up in quite different stories.

Writing about landscape is very popular at the moment but so much of it is more about the author than about the setting. How I felt when I saw this; how visiting such a place cured my depression, alcoholism or other problem. There’s nothing of that kind about Sandlands; this is a landscape to be lived in and coped with daily rather than to provide respite. You’re aware that generations have lived here, in a beautiful yet difficult terrain with its sand, its mud and its crumbling coastline. The stories are extremely well written and the descriptions of the countryside and its wildlife, (an owl, some rare butterflies), very fine and obviously thoroughly researched. What I liked particularly was the feeling of history: an ancient landscape with Anglo Saxons under your feet; pagan rituals mixed up with the Christian calendar; the past and present coexisting. There’s a hint of the supernatural, too, which somehow seems appropriate to the place.

If I were judging a short story competition (not very likely, I know), I’d probably pick All the flowers gone as the most perfect example of the genre in the book. Set on a former military airbase, it has a nice symmetry to it. Nightingale’s Return however, ended just where I wanted to know more. It’s about an Italian visiting England to see the Suffolk farm where his father worked as a prisoner of war. This story could be expanded into a whole novel. I can’t pick a favourite story because I liked them all. I admire Rosy Thornton’s writing very much and was delighted that she was kind enough to send me a copy of the book to read. Sandlands will be published on 21st July.
Collapse