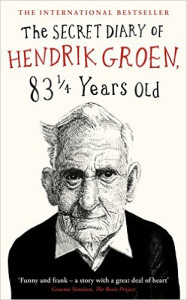 ‘a cultural phenomenon in his native Netherlands and now he and his famously anonymous creator are conquering the globe.’ The full title is Attempts to Make Something of Life. The Secret Diary of Hendrik Groen, 83 ¼.

Hendrik Groen aims to ‘give the world an uncensored exposé, a year in the life of the inmates of a care home in North Amsterdam.’ I started laughing on page two and kept chuckling for a while. Then the humour began to be a little too black for someone who is getting old and I started finding it depressing. This is totally the wrong attitude! Hendrik is brave and kind and funny and he tries so hard not to give in and become a moaner like many of his fellow residents. ‘Yesterday I took a walk to the florist’s to buy some potted bulbs. So that I can tell myself a week from now, when the hyacinths start to bloom, that I’ve made it to another spring.’ That’s very Dutch. I loved the rebellious Old-But-Not–Dead-Club which Hendrik forms with a few carefully selected friends. They plan outings so that they always have something to look forward to and are united in their efforts to undermine the home’s director and her petty rules. It’s interesting to find that care of the elderly is as much of a problem and sometimes a scandal in the Netherlands as it is here. Somehow one thought it would be better. ‘Three old biddies in one room, no privacy to speak of, no personal belongings. Stark comfort in the year 2013, in one of the richest countries in the world.’ The infirmities of his friends are hard for Hendrik to deal with but the OBNDC forms an excellent support group.
( Collapse )
Collapse