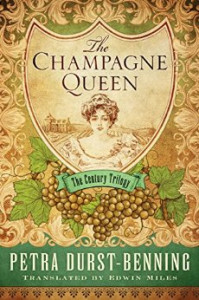 This is the second book in the Century trilogy. I’ve read book one and reviewed it here. In While the World is Still Asleep, we followed the fortunes of three girls in Berlin. Jo, Clara and Isabelle discovered the new freedom which cycling brought them. That was Jo’s book; this is Isabelle’s.

Isabelle has eloped with handsome, dashing Leon and now lives with his parents in the Palatinate. She’s cut all ties with home and finds herself bored and lonely. It’s lucky she’s still so in love with Leon or life would be grim indeed. Then Leon inherits a champagne-producing estate and they move to France, full of hope for a new and better life. Unfortunately, the estate is run down, there’s no money and a scheming woman is out to undermine the Feiningers and buy the land from them. Worse still, Leon is selfish and seems keener on winning cycle races than on settling down to be a vigneron. As so often in Petra Durst-Benning’s stories, the woman has to do the work. It’s a long, hard road, full of unseen disasters but eventually Isabelle makes herself the Champagne Queen.

These sagas about women in the late nineteenth century are made interesting by the descriptions of the landscapes of different parts of Europe and the detail about how people earn their living. The Glassblower Trilogy is full of fascinating information about glass blowing in Germany. In book one of the Century Trilogy we learn about the cycling revolution. This book about champagne is very beguiling. It’s easy to fall in love with the country, the people and with champagne. I felt like opening a bottle! Petra Durst-Benning’s books are heavily research based but the information provided is not intrusive, just part of the story. My only disappointment with the books is that there’s no humour in them. Those poor women and what they put up with! Book three will be about Clara and I’ll be reading it.

This book was translated by Edwin Miles. It’s an AmazonCrossing book and will be out on 20th September. I read it courtesy of NetGalley.
Collapse