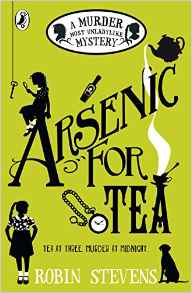 I read the first book in this series, Murder Most Unladylike before its release in 2014 and reviewed it here. I was very enthusiastic about Daisy Wells, Hazel Wong and their Detective Agency at Deepdean School and wasn’t alone in my appreciation. The book was such a success that four more have followed already, plus two Mini Mysteries. The series is published by Puffin, so the stories are intended for young readers but they can be enjoyed by people of any age, especially if they happen to be aficionados of school stories. I’ve at last partly caught up with the series, having just read the second book, Arsenic for Tea and the fourth, Jolly Foul Play.
( Collapse )
Collapse