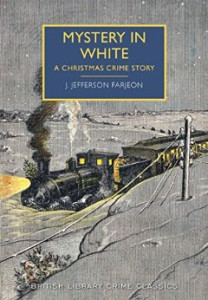 Not me, I hope, but the characters in two Christmas mysteries I’ve just read back to back. Mystery in White I bought in a charity shop a while ago and saved for Christmas. Until I read the introduction to the book, I hadn’t realised that J Jefferson was the brother of the more famous Eleanor. When I posted a review of another BLCC book on Amazon, saying it was the worst I’d read, someone commented on the lines of, ‘You think that’s bad! Try Mystery in White and read my review.’ I didn’t bother with his review but I have to agree that the book was disappointing. When a train becomes stuck in snow, a group of travellers make a break for it and find an apparently welcoming house, with fires blazing and tea laid. But there’s no one at home. The ill-assorted characters decide they have no alternative but to trespass and make themselves comfortable. One of their number is a psychical researcher and immediately detects ‘horror’ in the house. What that is, you have to read the book to find out. There are two solutions, one found by the stranded ones and the other by the police. Which is correct?
( Collapse )
Collapse