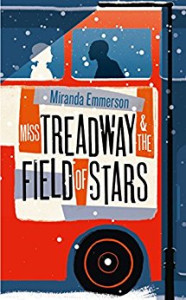 I was confused when I started this book as to when and where it was set. A few clues told me it was London in the 1960s but I wouldn’t have guessed. Anna Treadway is dresser to Iolanthe Green, currently starring in a play called The Field of Stars at the Galaxy theatre. ‘Lanny’ chats to Anna but they couldn’t be called friends. Then Lanny doesn’t appear for the next performance and seems to have vanished completely. At first there’s a storm of media interest but it fades and the police aren’t very interested. After all, people disappear all the time and they have their own reasons for doing so. Anna isn’t satisfied and starts to make enquiries of her own, which lead her into some very dark places.

She’s helped in this by a new friend, Aloysius, a well educated, gentle Jamaican. At this point the book still appears to be a mystery story but suddenly it’s about racism and a host of unconnected characters. I felt this confused the narrative. I was intrigued by the mystery and by the revelations; Lanny’s back story turns out to be truly extraordinary. It is really a book about identity and people pretending to be what they’re not. Lanny’s is the extreme example but almost everyone else is playing a part, too. Aloysius had dreamed of being ‘an English gentleman’; the policeman on the case, Barnaby Hayes, has changed his first name from Brennan because the Irish aren’t trusted in the Met.; Ottokar, the Turkish Cypriot who is Anna’s landlord and former employer, feels he has betrayed his past and doesn’t understand his daughter. Even Anna, it turns out, has rejected her own background and reinvented herself.

All this makes for a good read, with atmospheric descriptions of a seedy world of clubs, racism, violence and people on the wrong side of the law. This is no swinging sixties London but a grim place, where people still live in slums and struggle to survive. It’s a first novel and for me the parts didn’t really make a whole. I did enjoy reading it, though. I read it courtesy of the publisher Harper Collins and NetGalley. It will be out on 12th January.
Collapse