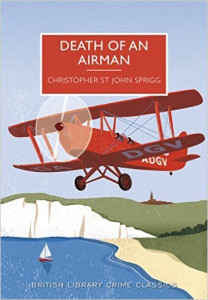 This is one of a set of British Library Crime Classics which I bought cheaply from The Book People before Christmas. The reprints are variable in quality but I liked this one.

The action is centred on a flying club (the book was first published in 1934 and people were ‘air-minded’) which also teaches people to fly. One of the would-be flyers is the Bishop of Cootamundra, who hopes to ferry himself around his large Australian diocese. An experienced pilot dies when his plane seems to spin out of control and crash. At first a verdict of ‘death by misadventure’ is recorded but the bishop notices something odd about the body. This leads to first a murder inquiry and then an investigation into a dope (cocaine) smuggling operation which covers Europe and may be centred on the airfield.

There are plenty of twists and turns in the plot and lots of geeky flying details for those who like that sort of thing. I did find the ending slightly disappointing but on the whole the book was highly entertaining.

Query. Why is Martin Edwards so well regarded when he can write like this in his introduction?
'He was born in Putney in 1907, but left school at 15,'
Collapse