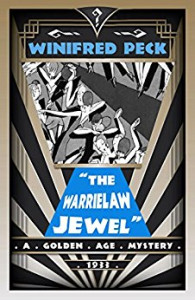 I enjoyed Bewildering Cares (reviewed here), and thought I’d try one of Peck’s detective novels, reissued by Dean Street Press. Her detective stories had previously sunk without trace and, according to the introduction to this one, merited the barest mention in her obituary. This is very unfair as The Warrielaw Jewel is far better than many crime stories currently being published again. I loved it!

The story is told in the first person by Betty, an Englishwoman married to a Scottish lawyer. She’s looking back to the early days of her marriage, before the First World War. It’s a book full of interest for anyone living in or knowing Edinburgh and it’s gossipy, village-y society. As a new bride, Betty is plunged into a round of visits to and from people in her husband’s upper middle class circle. Amongst these are the extraordinary Warrielaws. The family were once great landowners but now two spinster sisters live in an old, decaying house, looked after by a loyal servant. The house and its contents belong to the elder sister, Jessica and Betty’s husband John is her lawyer. ‘All Warrielaws hate each other’ is one of many sayings about the family and it’s soon obvious. Miss Mary shares the house with dominant Jessica, who infuriates her many relatives by selling off treasures from the house and giving the money to her charming nephew, whom she dotes on, rather than spending it on the house.

The Warrielaw Jewel, known as the fairy jewel, is an ancient and beautiful thing and everyone is outraged when Jessica decides to sell it. But, the jewel disappears, a murder follows and a man is on trial for his life. For Betty, now closely involved, this is a period of horror. The mystery is absorbing and the book full of clues. At one point, towards the end, the author states that the reader now has every detail necessary to solve the crime and issues a challenge to do so before the end of the book. I was only partly right. There’s plenty of basic detective work involving timings, investigated by John’s friend Bob Stuart, an astute retired policeman. I won’t give anything away. The characterisation is what made this book special for me. A large cast of oddities and the Edinburgh background make it a real novel, not just a puzzle. Not a dull word in it.
Collapse