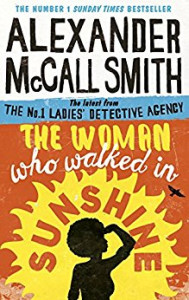 Mma Ramotswe, founder and owner of The No.1 Ladies’ Detective Agency in Gabarone, Botswana, sat in her office, a steaming cup of redbush tea in front of her. Her former secretary and now colleague, Mma Makutsi, was busy at her own desk. ‘Mma,’ said Mma Ramotswe. ‘I have some news.’
‘You have some news, Mma? What is this news? I hope it is good news.’
‘It is about Mr Alexander McCall Smith. He has written another book about us. It is the sixteenth book.’
‘Ow!’ said Mma Makutsi. ‘Sixteen books! That is a lot of books, Mma. I think Mr Alexander McCall Smith is a very clever man. It is very clever to write sixteen books about the same people.’
‘Yes. Mr Alexander McCall Smith is a very clever man. He writes many other books as well.’

Mma Ramotswe drank her tea. Outside, the sun beat down. Soon there would be rain. The grass would grow and the cattle would feed. Life would go on.

Thousands of miles away, callmemadam was reading the book the ladies had been discussing. ‘I think it is time for this series to end,’ she thought. ‘That is what I think.’

I read this book courtesy of NetGalley.
Collapse