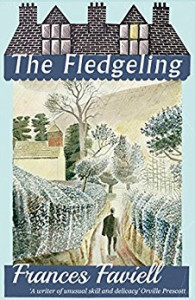 Of all the women authors whose books are being reprinted as part of the Furrowed Middlebrow venture, Frances Faviell is the real find for me. I was astonished that the brilliant A Chelsea Concerto had remained out of print for so long. The Dancing Bear took me to a post-war Berlin I had previously only been able to imagine from seeing films. I read The Fledgeling in a day; very appropriate because the action all takes place during twenty four hours.

The book begins with sensitive Neil about to desert from his National Service for the third time. He makes his way home to London, where his bedridden grandmother, Mrs Collins, is cared for by Neil’s twin sister, Nonie. Neil’s arrival causes a huge upset. Grandma has strict ideas about duty (her elder grandson died a hero in Cyprus), and thinks he should go back. Nonie, with a twin’s empathy, can’t bear him to return to suffering, while her husband Charlie just thinks he’s a pathetic coward. The poor conditions in the tiny house and the neighbourhood are atmospherically realized. We meet the other tenants (nosy), Miss Rhodes the social worker (well meaning, kind but unwelcome) and Linda, a bright spark of a child who climbs in the basement window to see ‘Gran Collins’ and cheer her life.

What no one knows but Neil is that his main reason for deserting this time is fear of Mike, a controlling bully who has wormed every detail of Neil’s life out of him and plans to join him in London. Mike’s eventual presence is felt as a sinister threat throughout the book. When he does turn up, all hell is let loose. It’s hard to feel much sympathy for Neil as he’s so totally wet and is making trouble for his sister and his dying but tough grandmother. The ending is quite melodramatic yet believable.

What struck me particularly about this book (published 1958) is how modern it seems. The post-war period is quite a fashionable subject at the moment as in Linda Grant’s The Dark Circle. The Fledgeling reads almost like a book written today about that period.

Unlike Faviell’s other novels, Thalia and The House on the Rhine (which I’ve only just read), it is perfectly constructed, almost conforming to the unities of French drama. Recommended.
Collapse