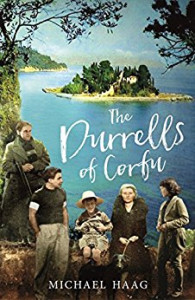 This book has been published to coincide with the start of the new series of The Durrells on ITV. I’ll say nothing about the programme. If you watched it with your critical hat on, you’d spend the whole time tutting, ‘Tsk! It wasn’t like that at all!’ So it’s better just to sit back and enjoy the scenery.

Much of The Durrells of Corfu is, unsurprisingly, about the time the family spent on Corfu. It’s very dependent on Gerald Durrell’s My Family and Other Animals, while pointing out discrepancies between Gerry’s account and the facts. But the Durrells spent only a few idyllic years of their long lives on Corfu. What happened before and afterwards? This is where Haag’s book is so interesting. Louisa Durrell was born in India and knew no other life, yet when her husband died young she upped sticks and moved ‘home’, first to London and then Bournemouth. The children were rarely living in the same place together for long and Gerry, by far the youngest child, lived alone with his mother for much of the time. Imagine her loneliness! No wonder she took to drink.

Even more interesting is ‘what happened next’. The only members of the family to make a real success of life were the eldest, Larry (author of The Alexandria Quartet), and Gerry. It’s ironic that we read in MFAOA of Larry carrying on about his ‘deathless prose’ and the difficulties of writing in the midst of a menagerie, yet it was Gerry, the boy who had no formal education after he was nine, who wrote the best sellers. He was only able to develop the way he did thanks to Larry and the remarkable Theodore Stephanides. Larry wrote for the love of writing, Gerry solely to raise money for his animal hunting expeditions. I re-read My Family and Other Animals immediately before reading Haag’s book and was reminded that it’s pretty well perfect. The way Gerald was able to twist the facts just enough to make a funny and beautiful story out of what was a risky venture into the unknown, is masterly. Yet he was virtually uneducated except in natural history.

This is a short book. It arrived one evening and I finished it the next. I opted for the paperback rather than the Kindle version because of the photographs and I recommend anyone else to do the same. There’s a lot of local interest for me because various family members lived in Bournemouth (not far from me) both before and after Corfu. The Durrells of Corfu is carefully researched yet reads as easily as a novel.
Collapse