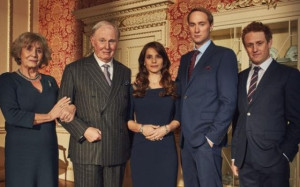 I was looking forward to this and, having no idea what to expect, was very surprised to find that it’s a modern Shakespearean tragedy. The whole thing is written in blank verse/iambic pentameters, what you will, which is a great achievement in itself and well spoken by the cast. The language suited the artificiality and staginess of the whole thing; definitely a stage play on television rather than a television play.

While sober crowds silently mourn the death of the Queen, the new King Charles III soliloquises like Richard III, glad that ‘at last’ his mother is dead and the job he’s been preparing for his whole life is his. Later, after refusing the Royal Assent to a Bill he disapproves of, he storms down to the House like Charles I, giving the impression that he believes in the Divine Right of Kings. He ends, in a poignant scene, like King Lear. Kate is Lady Macbeth, steely under the glamorous appearance. Prince Harry behaves like his namesake in Henry IV Part 1 and, like him, eventually forsakes his ‘low’ friends for duty. Diana’s ghost, seen at a distance in a white dress, appears to both Charles and William. Her appearance and her little girl voice are eerily effective. It’s absolutely nothing like The Crown.

Tim Piggot-Smith gives a touching portrayal of a man wanting to do the right thing, making a terrible misjudgement and then shockingly betrayed. So sad that it was his last performance. I shall watch it again.
Collapse