Each of these books has been out for some time and received great acclaim. For those who, like me, are late to the party, here’s a little appreciation. 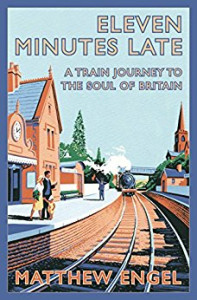 Matthew Engel loves railways. That’s why they make him so angry. This is a brilliant book; part amusing if exasperated history of the railways, part account of his personal travels on as much of the network as a Rover ticket could cover. These journeys were very different from those of Michael Portillo, on whose la-la land trips trains are always on time and clean and the staff courteous and helpful (while some unseen gopher takes charge of Michael’s luggage).

The history of British railways is a sad one. British engineering (some of it quite astonishing for the period), transformed travel for ever and was exported all over the world. Yet from the start, commercial interests overrode common sense so that the British system ‘just grew’, without any system at all, leading to the mess we have today. Fact #1 which was new to me: when Gladstone was at the Board of Trade in the 1840s, he wanted to nationalize the railways but was defeated by the self interest of entrepreneurs like George Hudson, the Railway King. No wonder that for the next 150 years the transport brief would be seen as a poisoned chalice.

Engel’s account is intended to be a book for the general reader, ‘a lovelorn passenger’s personal view of the railways’. How nice to meet Reggie Perrin again. Remember his daily walks to the station, through all those roads named after poets; the journey and his eventual arrival at the office with a ludicrous excuse for his lateness such as, ‘Twenty-two minutes late, escaped puma, Chessington North.’? Flanders and Swann also rightly get a mention. Fact #2 which was new to me: those touching lines at the end of The Slow Train which go,
‘No one departs, no one arrives
From Selby to Goole, from St Erth to St Ives
They've all passed out of our lives
On the Slow Train, on the Slow Train’
are inaccurate because the line from St Erth to St Ives was reprieved. Engel missed a chance to quote from The Secret Diary of Adrian Mole, when Adrian travels from Leicester to Sheffield by train: ‘(my father) gave me a bit of advice for the journey; he said I was not to buy a pork pie from the buffet car.’

Engel remains good humoured right through the Beeching cuts (about which he is very fair) until the privatization of the 1990s, when the tone changes because privatization makes him *very cross*. Private enterprise failed to do any of the things it’s supposed to be good at, with the result that today train travel is slower, dirtier, less well catered and very much more expensive than it used to be. ‘Travelling on the Brighton line, I was reminded of Sir Laurence Olivier’s campaign to prevent the abolition of kippers on the Brighton Belle.That was 1972. Gone now: Larry Belle and all. These days they pack the passengers like kippers instead.’ No planning, no foresight, no investment. It’s a sorry tale but a very enjoyable book. The title? Apparently, if a train is ten minutes late, it doesn’t count at all. Eleven is the magic number.
( Collapse )
Collapse