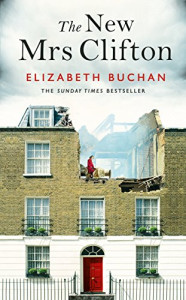 I found a lot of faults in the writing of this book; clichéd descriptions, the odd anachronism but nevertheless I gobbled it up. It’s a real page turner.

The story begins in 1974, with the discovery of the skeleton of a young woman in the garden of a house at Clapham Common. Then it’s straight back to the immediate post-war period. Gus, who has been involved in Secret Service work during the war, arrives at his Clapham Common home with a new wife, Krista. The war has changed him and everyone else. His sister Julia, widowed by the war, is bitter and unhappy. Tilly, the other sister, leads a rackety life. They share the house and do not make Krista welcome. Before his marriage, Gus was engaged to Flora, who is now broken hearted at what she sees as betrayal. Her brother, formerly Gus’s best friend, has been badly wounded, is much changed and furious with Gus. I got a little irritated by the way Gus, who loves all these people, doesn’t seem to notice how badly they treat Krista. In spite of her good English and her good intentions, poor Krista is hated by the English for being German (‘a kraut?’) and by the Germans for helping the British after the war. It becomes clear that she and Gus have worked together on interrogations of Nazis but it’s not at all obvious why they married, since theirs is a marriage in name only.

I’m fascinated by the 1940s and love books written either at the time or about the period. Elizabeth Buchan has created a believably drab London as well as a horrific Berlin. The interrogation work which Gus and Krista share has many ambiguities, as most espionage does, and the descriptions are both realistic and chilling. There are many flashbacks to the terrible state of Berlin in 1945 and of Krista’s struggle to survive. She is still suffering the effects of malnutrition. Throughout the book two mysteries haunt the reader: how Gus and Krista met and what made them marry and, whose body in the next door garden? This reader galloped through the book in a state of terror for Krista. Thank goodness the author gives us answers. Recommended.

I read this courtesy of the publishers and NetGalley.
Collapse