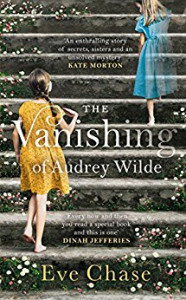 The book begins with a shocking event involving the four Wilde sisters and the mystery of just what happened keeps you guessing to the end. There are similarities here with two books by Katharine Swartz: The Vicar’s Wife and The Second Bride (both very enjoyable). As with those books, the story alternates between the present and previous owners of a house. Applecote Manor in the Cotswolds is large, isolated and cold but when Jessie sees it she knows it’s the place she, husband Will, baby Romy and Bella, the stepdaughter from hell (see The Second Bride again) can make a fresh start away from London.

In the summer of 1959 the four Wilde sisters are despatched by their infuriating, adorable mother, to stay at Applecote with Aunt Sybil and Uncle Perry. They don’t look forward to it because their cousin Audrey won’t be there; she disappeared without trace five years before. Margot narrates the events of that long, hot summer, remembering times spent at Applecote with Audrey, meeting local boys, which is disturbing, and coping with her aunt’s increasingly strange behaviour. Alternating with that story is Jessie’s attempt to make a home at Applecote. As soon as Bella explores the house she announces that something bad has happened there. She’s right, of course. People seem unwilling to come to the house to work. There are strange looks from the locals. It’s as though the past won’t leave Applecote alone.

In the end the two stories combine. We have to rely on Margot’s narrative to find out what happened to the Wilde sisters in 1959 but it’s in the present that Audrey’s fate is finally made clear. I found this very atmospheric and a good read. Ideal for people who like books about old houses and old mysteries.

The Vanishing of Audrey Wilde, also titled The Wildling Sisters will be published in July by Penguin/Michael Joseph and I read it courtesy of the publishers and NetGalley.
Collapse