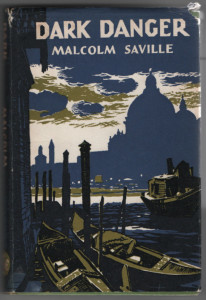 When I saw that Girls Gone By were bringing out The Purple Valley, I was reminded of the existence of Malcolm Saville’s Marston Baines books. First, I gave myself a bit of a kicking because I used to have copies of both The Purple Valley and Three Towers in Tuscany but got rid of them. The golden rule of purging your books should be: how hard would it be to find this book again? I still had two of the books and re-read them.

In the Marston Baines series, Saville was attempting a different sort of novel, intended for ‘young people’. So instead of young teenagers, as in the Lone Pine series, the characters are students, graduates, young marrieds. Marston Baines himself is a writer of thrillers who also happens to work for the Secret Service. Here’s how Dark Danger begins:
‘Patrick Cartwright, twenty-year-old Oxford Undergraduate, came to Venice for the first time late one June evening….

Within half an hour of his arrival he had saved a man from being murdered.’

That’s what I call a good start to a book. Unfortunately, the plot is less satisfactory, dealing with an international gang of crooks which gains control over people through Satanism. Throughout, Saville contrasts the evils of Satanism with the power and truth of Christianity. In Power of Three we have a similar global conspiracy, this time stirring up racial hatred and planning a neo-Nazi assault on Jews and black people. (Saville says ‘coloured’, as was more correct at the time of writing.)

I have several problems with these stories. First is the complete idiocy of some of the characters, falling into traps such as responding to false telephone messages and getting themselves kidnapped. Marston Baines is by far the most interesting character yet he plays little part in most of the story, turning up at the end like a deus ex machina to get people out of the pickle they’ve managed to get themselves into. Worst of all for me is that the books are neither one thing nor t’other: neither children’s books nor adult thrillers. Most of the younger characters are already paired off, so there’s no ‘will they, won’t they?’ interest. It also gives Saville the opportunity to have these happy people talking about lurve. I suppose he was trying to be modern but dialogue was not Saville’s strong point, IMO, and I find these conversations excruciatingly embarrassing. 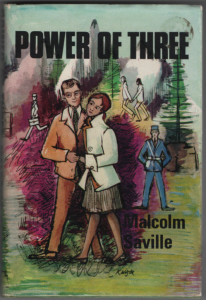