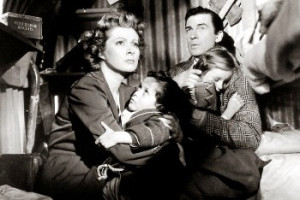 I noticed that the film of Mrs Miniver was on at some ridiculously early hour, so recorded it for later viewing. I knew I’d seen it before, probably when I was a child. The only scene I recognised was the one of the little boats chugging along in the dark on their way to Dunkirk.

It’s important to remember that the film is blatant propaganda, made by William Wyler in 1942. Winston Churchill said that it had done more for the war effort ‘than a flotilla of destroyers’. It’s designed to show Americans what the English (forgive them for always using ‘English’ rather than ‘British’), were going through and so gain support for America’s help for the European war effort.

At first, I found the film madly irritating. The opening credits tell you it’s the story of ‘an ordinary middle class English family’ when the Minivers were upper middle class. English life before the war was said to be ‘careless’ rather than ‘carefree’. Then we’re told that the film is ‘based on the book by Jan Struther’. That’s based on as in using the names and then writing a completely new story. The English accents of the American actors are terrible; Mr Miniver and son Vin couldn’t have looked and sounded more American if they’d tried. The Miniver house looks nothing like any house in England, the church doesn’t look English, nor do the railway station, London or the flower show.

The film opens with Greer Garson (wonderful), wearing a very unflattering hat, jumping off a bus in order to rush back to a shop to buy an extravagant hat she’s seen there. Meanwhile her husband is ordering a new car. Each is wondering how to explain the purchase to the other. This is very loosely based on an incident in the book. There is actually very little mention of the war in Jan Struther’s episodic description of Mrs Miniver’s life. There’s a scene in which they all go to have their gas masks fitted and mentions of the evacuees they’ve taken in at their second home in the country. The children are looked after by a housekeeper, so it’s no great sacrifice. Clem goes away to join an Anti-aircraft battery. Mrs Miniver frequently compares this war with the last one, saying that this time, thank goodness, they are fighting an idea, not a nation. Hating Nazism rather than Germans was actually a rather liberal idea.

Once the war starts, you begin to see what makes the film such a classic. When the family is huddled in a shelter in the garden (see pic above), I physically flinched and ducked with the whistle of the first bomb. The locals in the pub, laughing at Lord Haw-Haw is another good scene. I thought the German airman in the kitchen was an unnecessary addition to the story but it’s designed to show how nasty Germans were. The focus throughout is on Mrs Miniver and her calm courage: worrying about Clem at Dunkirk, dealing with the airman, coping with the deaths of people she loves. I couldn’t get through the film without crying. No wonder it was such a success.
( Collapse )
Collapse