My stop on the blog tour! Hop off the bus and read on.
Ever heard of nappishness? It first appeared in print in Hermann Melville’s Moby-Dick in 1851.
‘Moby-Dick is also credited with introducing a fairly niche set of words into the English language, including cetology, the study of whales, and plum-puddinger, naval slang for a voyage short enough to carry fresh fruit and other spoilable provisions. Among the more useful terms Moby-Dick introduced to the language, however, is nappishness - another word for sleepiness, or an inclination to nap.’
I like it! I also like naps and the book this quote is taken from. 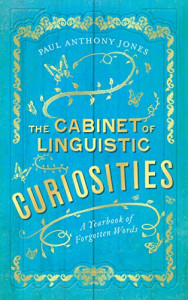 There’s an uncommon word for every day of the year. Did you know, for instance, that muggle, J K Rowling’s name for people without magical powers, is actually an old word for a fish’s tail (26 June)? Or that if you are equally clumsy with both hands (the opposite of ambidextrous), you are ambilaevus (3 September)? I’ve a mind to refer to this book constantly and bring out a mystifying word (on the given day), just to fox people.