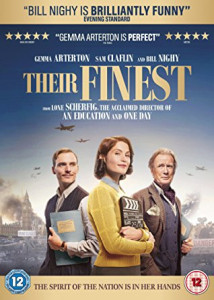 Yesterday evening I saw Their Finest. Watching this DVD was like being in a cinema and not in a good way. It started with what seemed like hours of trailers for other films and even an advertisement (for Maltesers, since you ask). I began to think the wrong disc had been put in the box. Nor was I impressed by the cover blurb. ‘Bill Nighy is brilliantly funny’. Bill Nighy is Bill Nighy and amusing, rather than hilarious. (Even so, I’d watch him in anything.) Has Jeremy Irons so dropped out of public consciousness that he needs a film credit to remind people who he is? Tsk.

The film is based on the novel Their Finest Hour and a Half by Lissa Evans. I wrote about it enthusiastically here and I think her Crooked Heart is even better. I can’t understand the change of title. Surely the point is that the propaganda film the characters are making lasts for an hour and a half? And their finest what? It’s like WIA’s ridiculous BBC job title ‘Head of Better’; completely meaningless. What’s more, I note that Penguin have reissued the book with a film tie-in cover and the new title.

These days, film makers can do the 1940s standing on their heads: costumes, smoky atmosphere, wartime background and bomb damage were all excellent except that they let ‘train station’ slip through. Nobody said that in 1940 and I don’t say it now. Would it kill people to hear an outdated expression in a period film? This all sounds very grumpy but I did enjoy the film, which was funny and touching, if rather slight. I enjoyed the few clips from Harry Enfield-style ‘informationals’, films produced by the Ministry of Information. Gemma Arterton made the heroine Caitlin very sympathetic and believable.

Verdict: some really splendid knitwear on show but the book is better.
( Collapse )
Collapse