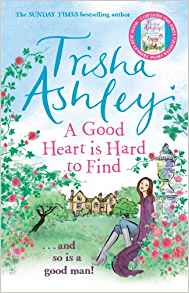 I was slightly disappointed to find that this was not a new book by Trisha Ashley but an old one reissued with a new title. Luckily, it wasn’t one I’d read before. Cass is a writer of successful, terrifying horror stories. She’s perhaps been influenced by the terrible treatment she received as a child from her obviously insane father. The silly woman has been stuck for twenty years in a relationship with a married man. Max won’t leave his invalid wife (or her money) and refuses to have children. Now, he’s in California and the scales are starting to fall from Cass’s deluded eyes. When tall, dark, eccentrically dressed Cass meets tall, dark saturnine Dante and immediately fights with him, it’s clear how the story will end. Trisha Ashley is always entertaining and it’s fun following events to their inevitable conclusion. I did think the religious ravings of her father were made funnier than they would have been in fact; from another author, this would have been a tale of abuse and damage. I think Trisha Ashley’s books have improved since this one was published (as Singled Out) in 2003. I read it courtesy of NetGalley and it’s out on 25th January 2018. 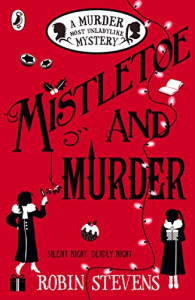 This is the fifth book in the Murder Most Unladylike Mystery series, starring the Wells and Wong Detective Agency . I’ve had the book for a while but saved it up for December reading. The girls are spending Christmas in Cambridge with Daisy’s great aunt, a formidable don at St Lucy’s College. Daisy’s brother Bertie is a student at Maudlin. The name is explained in the introduction and incidentally teaches young readers how to pronounce Magdalen College, Oxford.

Daisy and Hazel jump in as usual when there’s a murder at Maudlin. They are supposedly being chaperoned by a St Lucy’s student, Amanda, but she leaves them alone (her doings are suspicious), so they do pretty well what they like i.e. not what young ladies should be doing. It’s all rather grim just on Christmas but the young detectives and their detecting rivals Arcady and George can’t rest until the mystery is solved. Things get quite hair raising.

I like the way the girls’ characters develop in these books, especially Hazel’s. She may not be as pretty or as daring as Daisy, but she’s maturing faster. The book touches on some important issues. Hazel notices the austerity and poverty of St Lucy’s compared with Maudlin (just like in A Room of One’s Own) and, although she would love to study in beautiful Cambridge, she’s annoyed that she wouldn’t be able to take a degree and can see that clever women like Amanda are treated much worse than less clever men. There’s also the race issue. Hazel is Hong Kong Chinese and would like to be as English as possible. Meeting George for the first time, she finds that he and his brother are Indian, although born in London. There’s also a Chinese student at Maudlin. Hazel realises that however much they all try to fit in, they will always be seen as different, which is distressing for her.

I didn’t enjoy this book as much as the ones which are set in school at Deepdean, but it’s still a good read. The events are very unlikely, but it is a book for young readers, after all.
Collapse