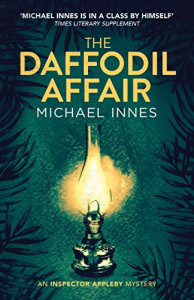 Michael Innes (the academic J I M Stewart), is hardly a neglected crime writer; I’ve had a lot of his books in green Penguin crime editions over the years and see that I still have a couple after numerous book purges. The Daffodil Affair was first published in 1942 and has now been reissued by Ipso Books, ‘a digital publishing company, dedicated to bringing readers dynamic writing from classic and contemporary authors.’ It begins so well. A young London girl disappears, presumed abducted. This is a matter for Scotland Yard detective Hudspith, who is obsessed by the terrible things that happen to girls. Almost simultaneously, an apparently valueless horse called Daffodil is stolen. This sends Innes’ hero Appleby up to Yorkshire at the request of his aunt, whose friend is upset by the loss of her favourite carriage horse. On a detour in Harrogate, Appleby fortuitously witnesses the disappearance of another girl, one with the reputation of being a witch. Back in London, an entire eighteenth century house, reputedly haunted, just disappears. What can be the connection between these strange events? Everything is set up for an Appleby investigation of something extraordinary.

Unfortunately, this is where the book lost me. We are to believe that an important man like Appleby would look into horse theft. Then, which really stretches credulity, that two Scotland Yard men travel to South America, in wartime, in pursuit of horse, girls and house, with no evidence of a crime. More, they travel in company with the people responsible and know they are doing so and might get bumped off at any moment. We then spend an uncomfortable time travelling up an unnamed South American river full of alligators to an unnamed jungle area full of ‘savages’. The crime is quite outside the scope of normal detective work. At one point, Hudspith says, ‘We’re in a sort of hodge-podge of fantasy and harumscarum adventure that isn’t a proper detective story at all. We might be by Michael Innes.’
‘Innes? I’ve never heard of him.’ Replies Appleby. Clever. The whole book is clever, full of allusions for those who get them. Of course, Appleby solves the case but the greatest mystery remains (for me), how did they get the horse back to England?

I admit that a lot of my disappointment with the book is due to my irrational dislike of anything to do with South American jungles. I always think of The Man Who Liked Dickens. If you have no such prejudices, this is a witty and entertaining novel. I read it thanks to NetGalley.

Perhaps I should give these two a try and see if I can still read Innes. 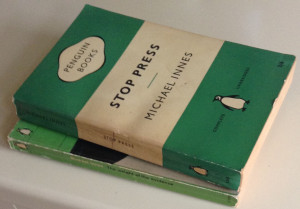 I wrote recently of my intention of borrowing more books from the library. I have just worked with two windows open: Dorset libraries and my Amazon wish list (which is really a list of books I would like to read). *Every single book* I wanted to borrow was either unavailable or would incur borrowing fees. I pay enormously high council tax on a small cottage. I absolutely refuse to pay extra to borrow a book which, if I lived in a city instead of in the sticks, would be easily accessed. This has left me fuming. I’d honestly rather *buy* a book than pay to borrow it. Now all you librarians out there can explain to me why it is essential that I pay two or three pounds to borrow a book when I already pay to support the library system. I shall remain unconvinced.
Collapse