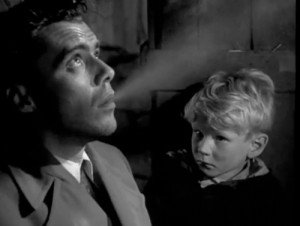 Now that Talking Pictures TV is available in my area and I’ve retuned my set to receive it, I have no excuse to moan that ‘there’s nothing on TV’. In fact, my box is filling up with films recorded for a rainy day. I’ve revisited films I saw years ago and never since, like Only Two Can Play. Yesterday evening I watched a film I’d never even heard of (but starred Dirk Bogarde) and wondered how I’d missed such a classic for so long.

It’s a black and white film, released in 1952, in which Bogarde plays Lloyd, a killer on the run. There’s a witness, a six-year-old-boy played by Jon Whiteley, who is himself running away because he fears punishment at home. Lloyd grabs the child and the two begin a strange odyssey. There are many other characters in the film but it’s really a two-hander about this odd couple. At first, the child is just an irritating nuisance but Lloyd softens, becoming almost tender in his care for him. Bogarde portrays this progression beautifully. ‘Robbie’ doggedly follows him around, refusing to stay behind even when told to and putting up with cold, hunger and fear. The sight of the little figure trudging bravely along behind his ‘abductor’ is unforgettable. Jon Whiteley says very little in this film but I think he’s probably the best child actor I’ve ever seen.

I loved this film. What treat for me next? 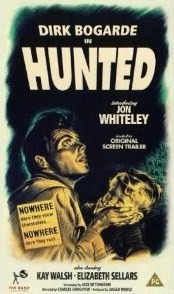