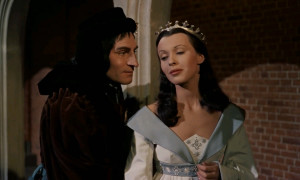 A marathon watch yesterday evening and that was with skipping all the ad breaks. Olivier’s Richard III is a long film. It’s years since I last saw it and this time I had fun recognising actors I wouldn’t have known then, like John Laurie and Patrick Troughton. It does look like a period piece today. The cardboard sets, the costumes which looked borrowed from some pageant and even the style of acting, which can remind you of Robert Greene (Mark Heap) in Upstart Crow. I could picture modern day drama students watching it and roaring with laughter. Think you know it all? Watch and learn; learn how to speak verse, because you cannot fault Olivier, Gielgud, Richardson or the others on that point. Every word clear as a bell; no muttering or mumbling.

Although much parodied, Olivier’s performance as Richard is still a kind of touchstone for the role, one which other actors, with a different take on the part (endlessly possible with Shakespeare), will measure themselves against. I chose the picture above because I’ve always found his ‘honeyed words’ seducing Lady Anne (whose father and husband he had killed!) convincing. I couldn’t find a picture of the scene where, having conspired with Buckingham (Ralph Richardson) to make himself king, he swings down a bell rope and shocks Buckingham by holding out his hand for kissing, then swiftly lowers it so that Buckingham has to kneel. Melodramatic but very effective. If I’m honest, I enjoyed the recent television version, with Benedict Cumberbatch as Richard, more but I’m glad we have this (restored) version of the way things were.
Collapse