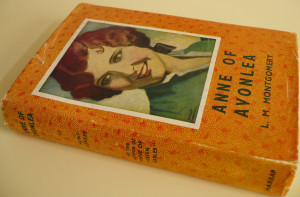 It’s because I’ve been watching Anne With An E on Netflix and I need to take away the nasty taste with a spoonful of sugar. I enjoyed the first episode to begin with, mainly because of the beautiful scenery. It’s also very well acted. I was slightly taken aback by the flashbacks to brutality in Anne’s past but at the end, shouted, ‘Noooo! It never happened!’ at the screen. After the notorious brooch incident, Anne is packed back to the orphan asylum, almost abducted by a nasty man at the station and eventually rescued and brought home by Matthew. I swore I wouldn’t watch any more but of course I did. Everything is made as bad as possible! Anne loved school at first and told Marilla how nice all the girls had been to her. In the film, she has a terrible time. The same with the Sunday School picnic she looked forward to so much. In the book, she enjoys herself and tastes ice cream for the first time in her life. In the film, she overhears people talking about her unkindly and runs away, wretched. I know that later on there will be even more and worse deviation from the text.

Why take a book which is essentially a happy story about a clever orphan girl who ends up in a loving home, wins all the prizes, goes to college and becomes a teacher and turn it into a fable of child abuse? I just don’t see the point of it. Rather typically, The Guardian reviewer liked this black version, calling it ‘lush, sad perfection’, ‘An Anne for our times’. My view is closer to that of the reviewer in Vanity Fair.

I’ve illustrated this with a picture of the wrong book because my copy of AOGG doesn’t have a pretty dustwrapper. I have all the Anne books and every now and then, I’ll read them again. My personal opinion is that they get worse; I much prefer Anne as a child to Anne as a grown up. There’s her unkindness to poor Gilbert and even when they are at last an item, she’s infuriating, or would be to any normal man. Picture this:
Brainbox Anne, ‘Oh Gilbert, aren’t the stars wonderful tonight? Don’t you think they must be God’s daisy chain?’
Brainbox Gilbert, ‘For goodness sake, Anne, shut up for once and give us a kiss.’
I wish he would say something like that. Sadly, as they get older, Anne and Gilbert become increasingly conservative (indeed, Conservative) and therefore rather dull. I still find the books very readable and L M Montgomery an interesting writer.
Collapse