This was supposed to be part of my ‘April books’ post (as yet unfinished) but turned out so long, I thought it had better have a post of its own. 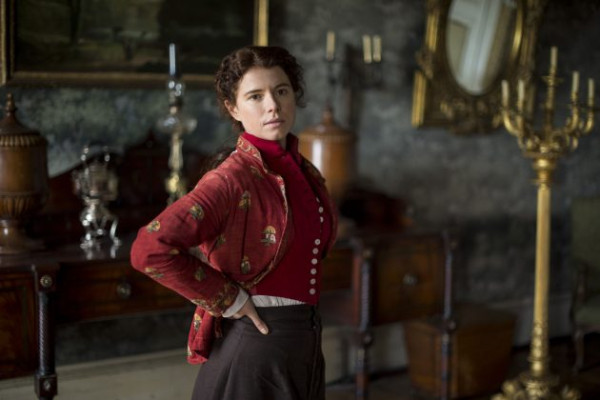 When the TV series began, I decided to re-read The Woman in White. I soon found that I hadn’t read it before but knew the story from an excellent radio dramatisation heard years ago. The introduction to my (Daily Express!) 1930s copy, states that Thackeray sat up all night to finish the book. I didn’t match that feat but did romp through its 500+ pages very quickly indeed. It tells the story of two half-sisters, Laura Fairlie and Marian Halcombe, living in a remote country house with their selfish uncle. Laura has a fortune; Marian, none. It was the dying wish of Laura’s father that she should marry Sir Percival Glyde. Why? I find this a weak point in the novel. A young drawing master, Walter Hartwright, is hired to teach the girls sketching. He has previously had a strange encounter on Hampstead Heath with a wild young woman who claims to have been wrongly put away in a lunatic asylum and begs for his help in escaping, which he gives. She is Anne Catherick, the eponymous Woman in White, who loathes and fears Glyde.

Laura and Walter are attracted to each other but her loyalty to her dead father is such that she resolves to go through with the marriage to a man she doesn’t love. Things get really interesting when Glyde’s friend Count Fosco appears on the scene. He’s a wonderful, larger than life figure (literally; he’s described as grossly corpulent), with his devotion to his pet birds and mice, his love of music and all things beautiful, his knowledge of chemistry and his wickedness. Glyde is a pantomime villain, a very stupid man, while Fosco is all brains and guile. Their plan, of course, is to get their hands on Laura’s money. Anne Catherick tries to warn Laura against Glyde; she’s forever flitting about in churchyards and crumbling boathouses uttering sibylline but incoherent warnings. This adds to the gothic feeling of the novel, as does the isolation of the two young women in Glyde’s gloomy house.

Here is the time to say that Laura is rather an Amelia, a pale and spineless cipher for put-upon womanhood. Marian, in contrast, is intelligent, strong willed, sharp and tough. Count Fosco genuinely admires her virtues but why Walter would look at Laura rather than extraordinary Marian is a mystery about men’s tastes. The book races to its conclusion with many a twist and turn. You might think it a feminist work because of its depiction of the powerlessness of women, yet after some melodrama things end conventionally enough.

Collins used multiple narrators to tell his tale, which makes adaptation difficult. The great mystery about the TV version is not, ‘what is Glyde’s terrible secret?’ but how it is possible to turn such a cracking read into something so slow, boring and lacking in menace? Then there are the historical inaccuracies. The book was published in 1859 yet Laura looks half the time as if dressed in a regency nightie, while wonderful Marian wears clothes so eccentric for the date (she looks great!) that you wouldn’t turn a hair if you saw her walking down your high street tomorrow. Very disappointing so far.
Collapse