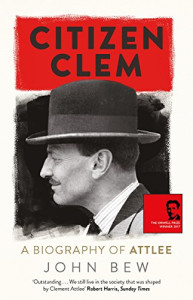 Clement Attlee has long been my political hero, so when a friend recommended this book, I was keen to read it. It’s brilliant and deserves all the prizes it’s won. I won’t try to write a review, since I can’t imagine that many people who visit here will want to read nearly 600 pages of political history. So I’ll just flag up some of the interesting things about Attlee’s life.

First, you have to remember that he was born in 1883 and always recalled watching the parade for Queen Victoria’s jubilee in 1897. He was a Victorian, yet was Prime Minister when I was born. His upbringing was conventional: a happy family life, Haileybury and Oxford; not the background you expect for a revolutionary. It was working in the East End of London which converted him to socialism and he devoted his life to improving the lot of the poor. Already thirty-one when the First World War broke out, old by the standards for new recruits, he volunteered anyway because of his strong patriotic feelings. He fought bravely throughout the war, ending it as Major Attlee. This stood him in good stead in his later political career, as no one could doubt his courage.
( Collapse )
Collapse