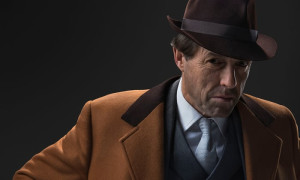 The BBC’s new series, A Very English Scandal is good; very good. An hour’s viewing passed by in a flash, always a good sign. As I’ve written before, I’m old enough to remember the unfolding of the Thorpe scandal and have also read John Preston’s book, on which this series is based. I don’t really want to write about the drama so much as about Hugh Grant. I’m rather sick of reading, from both professional critics and bloggers, that Grant’s performance is ‘surprising’ or ‘revelatory’ because the writer had previously thought of him as ‘just’ a romcom actor. Just? Since when did comic acting become easier than any other kind? Don’t you think that a lot of hard work and serious craft goes into playing a romantic lead? Take Cary Grant, the absolute master of the genre. Did he make it to the top without hard work and artistry? Hugh Grant is a very good actor and, IMO, plays Thorpe very well indeed, capturing the charm and glamour of the man but also his recklessness and his ruthless streak. He’s totally believable, which is the more remarkable in that he’s playing a man who was thirty years his junior at the time of these events.
Collapse