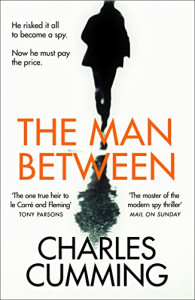 I love a spy story, so I’m surprised I hadn’t read anything by Charles Cumming before. This is a classic story of an amateur spy, the sort of thing Joseph Kanon does so well. Kit Carradine is a successful writer of spy fiction and about to travel to Morocco to take part in a literary festival. He’s asked to do a small job for British Intelligence while he’s there and is thrilled by the prospect. His own father had been in the Service but his career was ruined when he was betrayed by Philby. Perhaps Kit can redress this? He’s a patriotic sort of chap and pleased to serve his country.

As is the way of such novels, he soon finds himself in way above his head not knowing whom to trust. At the time the story is set (pretty much the present day), an outfit called Resurrection is carrying out terrorist attacks all over the world against people and institutions perceived to be right wing. Kit has been asked to hand over a package to a missing girl, Lara, once associated with Resurrection and now believed to be on the run. He does find her and determines to rescue her. But does she need rescuing? Is she what she seems, a beautiful young woman always travelling to escape those who want to kill her? There are so many twists to this story that I can’t describe the plot for fear of spoilers. Suffice to say that I finished it in an orgy of one day reading and found it a real page turner.