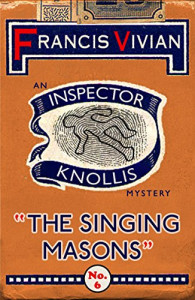 On October 1st, Dean Street Press are bringing out reprints of the Inspector Knollis mysteries by Francis Vivian. These were published between 1941 and 1956 and have been almost impossible to find since. Vivian is a new author to me. I’ve just read The Singing Masons, which Dean Street kindly sent, and found it rather good. An unpleasant person murdered, plenty of suspects, all connected and all lying and the clue to the whole mystery is with the bees. I certainly learned a lot about bee-keeping! A pity I guessed the murderer but I still enjoyed the book. Knollis is one of those intuitive, theory-making detectives and a lot of the basic police procedural is left to his colleagues. I still don’t feel I know what makes Knollis tick. Perhaps he becomes more human in some of the other books about him.
Collapse