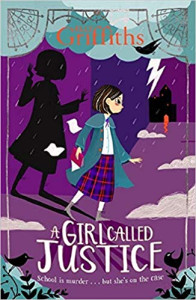 I’ve enjoyed Elly Griffiths’ Dr Ruth Galloway mysteries, so when I learned that she’d written a children’s book about a schoolgirl detective, I just had to read it. Luckily, the publishers and NetGalley obliged and I got an advance proof copy.

When Justice Jones’ mother dies, her father, a criminal barrister, sends her to boarding school on Romney Marsh. Her first sight of the forbidding building makes her think it has ‘potential for murder’. As she’s never been to any school before, the rules, the terrible food and the cold are a shock to her. But almost as soon as she arrives, she learns that there’s been a death in the school which seems to have been hushed up and she’s on the case. I needed several clues before I was able to set the story between the wars. Justice finds that she’s hopeless at lacrosse but advanced in Latin, thanks to her mother's teaching. Some girls are snobbish and hostile but she chums up with nice Stella and with Dorothy, one of the servants, who will both help in her investigations.

As winter creeps on the cold intensifies, snow sets in and the school is cut off from the outside world. Justice doesn’t know who to trust when there’s another unexplained death. Why are so many people wandering about the old building in the night? Could even the charming yet scary headmistress, Miss de Vere, be involved? There are more murder attempts and it takes all Justice’s resourcefulness and courage, with the loyalty of her new friends, to discover the criminal at work in their midst. It helps that she’s read all her father’s murder cases and her mother’s detective novels.

I see this book is recommended for fans of Enid Blyton, presumably because the school has four towers, for I can see no other connection. Justice is far more like Flavia de Luce than any of Blyton’s heroines. If you enjoy Robin Stevens’ Wells & Wong mysteries, you’ll love this. It’s a genuine school story in the classic mould but with a brilliant twist. It’s out on 2nd May and I recommend it highly to all lovers of both school and detective fiction.
Collapse