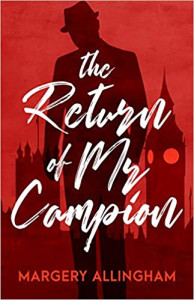 This is a collection of short stories, first published together in 1989 and now reissued by Agora Books, thanks to whom I read it. The title is strange, since Mr Campion appears only briefly; most of the book consists of standalone short stories, one of which I’d read previously in Campion at Christmas. There’s an essay by Allingham about the way critics treat detective fiction differently from other novels; she defends her craft vigorously. There are two whimsical pieces in which she writes as herself. In one, My Friend Mr Campion, she explains how Campion began as a minor character but insinuated himself into the books until he was the hero. In the other, she has a fantasy meeting with Lugg in which she asks how he can possibly still be alive? It’s nice to meet Luke again in a couple of stories but the lack of Campion is disappointing, as is the repetition of a story already in another collection.
Collapse