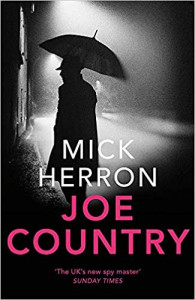 Wow! How does Mick Herron do it? This sixth Jackson Lamb thriller is as brilliant as the previous ones, gripping from the first page to the last. (Link to my reviews here.) The trouble with reading one is that you just have to know what happens next but don’t want to finish the book too quickly. A cunning plan of switching scenes throughout the narrative leaves the reader in a permanent state of suspense.

Joe Country opens with a startling image and a casual remark about bodies. This means that for most of the rest of the book you’re wondering who was killed and hoping it wasn’t a favourite character. In the second chapter we have the now trademark meander around the decaying ruin that is Slough House. Then the Slow Horses appear, our spooks (fewer now), who have allegedly failed at Park House (HQ) but still manage to foil the bad guys before ‘Lady Di’ (Diana Taverner, now First Desk) and her minions.

This book is achingly topical: Brexit; a woman Prime Minister; Salisbury; a royal personage* (unnamed but easily guessed at) in shady company. A new member of the team (if you can call it that), has been sacked for having child pornography on his work computer, a charge he denies but which sticks. Since it’s hard to hack into Park House computers, it seems there’s been foul play. That’s a story line which turns out later to be important. The thriller aspect of the book comes when various slow horses set off to Wales, in terrible snowy conditions, in search of the missing son of a dead colleague. The chase, the battles with the bad guys, have you reading faster and faster.

I’ve said before that what I particularly like about the Jackson Lamb series is that the books are not only exciting but funny. The comments on modern life, the despair over the state of the country, are somehow made amusing. As for Jackson Lamb, he of the gross personal habits, it’s uncanny how he manages to solve problems from his desk, rather than by haring all over the country. He insults and puts down his ‘joes’ all the time but mess with them and he er, doesn’t like it much, shall we say? I find all his remarks funny. As I read a proof copy, I can’t quote from it (Publisher’s Rules, ha ha), but imagine that someone just happened to ask Lamb how on earth he knew a certain fact and he said something like, ‘Let’s suppose I’m a spy.’ You find that funny or not; I certainly do.

I can’t recommend Mick Herron highly enough; this is the best series I’ve read in a long time. I do recommend that if you’re new to Jackson Lamb, you start with the first book, Slow Horses. Many thanks to the publishers and NetGalley for the advance e-book. Joe Country will be out on 20th June.