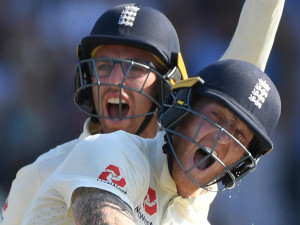 Mike Atherton begins his cricket column in The Times today:
Now who will stand on either hand,
And keep the bridge with me?

If he can quote Macaulay, I can quote Sir Henry Newbolt:
(Seventy-three) to make and the match to win -

It took one other man, not two, to hold the bridge. Step forward Jack Leach, last man standing and a dogged hero who lasted the course and made it possible for Stokes to win the game so astonishingly; something Stokes himself is keen to point out. How often do you see an England player wiping his glasses before facing all that Australia can throw at him? Atherton sees Stokes as Horatius; to me, he’s a berserker. That Viking chin of his hints at distant warrior ancestors, charging into battle with a red mist before their eyes. I was very hard on Stokes when he was in trouble last year; drunken violence is not the example you want an England cricketer to set to the young. I forgive him now for his sheer, determined heroism. I see him going over the top, insanely brave and inspiring others.

Some of the papers opine that England was ‘glowing’ yesterday, after record-breaking temperatures (not that bad here, fortunately) and an apparently miraculous Test victory. This particular English person was a complete wreck by half past four. The afternoon veered unbearably between hope and despair and as the number of runs required got into single figures, the tension was almost intolerable. What a day to have been at Headingley!
Collapse