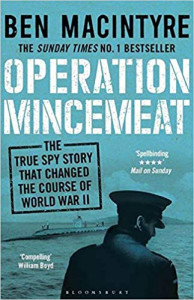 Yet again, I find myself re-reading books I know I’ll enjoy. In October it was a couple of delightful books by Eva Ibbotson. I’m getting so disillusioned with ‘the modern novel’ that I’m reading more non-fiction. Ben Macintyre never lets me down and I picked Operation Mincemeat when it was a Kindle 99p deal. This is the story of the wartime deception operation better known as The Man Who Never Was, due to the famous book and film of that name. I followed this by re-reading Duff Cooper’s novella Operation Heartbreak, published in 1950. I learned from Macintyre that Cooper’s book was the first public revelation that a dead body, carrying fake documents intended to fool the Germans as to where the invasion of southern Europe would take place, was dropped off the Spanish coast to be discovered. There was a possibility of Cooper being prosecuted under the Official Secrets Act but he said that if charged, he would say that he got the information direct from Churchill. His book is nothing like the truth. Most of the story is about an invented dim but honourable professional soldier, whose body was eventually used. The Man Who Never Was was the work of Ewen Montagu, one of the originators of the plan and was more accurate. Plenty of people objected to this, too but the book became a bestseller.

When I found myself (horrors!) with no book waiting to be read. I browsed books I could get free with my Prime membership and borrowed
A Quiet Life in the Country, the Lady Hardcastle Mystery 1 by T E Kinsey. I’m absolutely loving it and now want to read the whole series. If you like what the Americans call ‘cozy mysteries’, this series is for you. 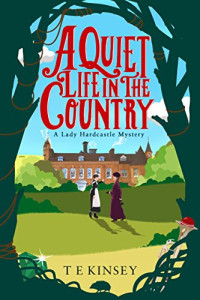