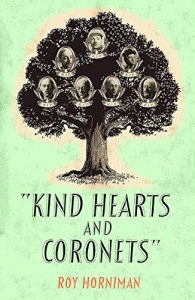 Dean Street Press will bring out a new batch of reissued crime mysteries in March. I couldn’t wait to get stuck in to Kind Hearts and Coronets because I wanted to see how it compared with the celebrated film. I had no idea that the original book was published in 1907 as Israel Ranch, the Autobiography of a Criminal. It’s hardly a mystery, as Ranch states from the start his intention of killing off everyone who stands between himself and the title of Earl Gascoyne. As he is writing this memoir from the condemned cell, it seems obvious that he is going to be caught. The book and the film have quite different endings, though.

Israel Ranch is half Jewish and makes much of this throughout the book, often referring to ‘our race’ and the ways of ‘the Oriental’. His callousness is extraordinary, even when he expresses regret at ‘having’ to kill someone he rather likes. He also loathes blood sports and is ‘particularly fond of children’. His undoing is his belief in his own cleverness. The love affairs with Sibella, his childhood sweetheart and with his eventual wife Edith Gascoyne, seem real enough, so he is human, although a love rat. Joan Greenwood and Valerie Hobson were perfectly cast as these characters in the film.

I was struck by how similar in tone the book and the film are; reading, I could hear Dennis Price in my head. The big difference is that the film is presented as a comedy and the victims as people not much to be cared about, whereas the book makes Ranch’s wickedness quite clear. Yet he is both villain and hero. I enjoyed reading it very much.