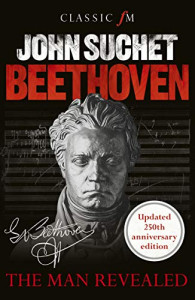 If you ever listen to Classic FM, if only in the car, you can hardly fail to be aware of this book as it’s constantly being plugged there. It’s an updated version of an earlier book, published to coincide with the 250th anniversary of Beethoven’s birth. I’ve now read several of Suchet’s biographies of composers and I like them for the same modesty and unpretentiousness which characterise his broadcasts. He makes no bones about stating that the book contains no original research and is written not for musicologists but for those who love Beethoven but may not be able to read music. I can read music but couldn’t follow anything really technical, so I count myself one of the general readers the book is aimed at.

Beethoven’s life is surprisingly shocking. Even when acknowledged as the greatest musician of his age, he lived in appalling squalor and dressed like a tramp. He picked quarrels and was unforgiving. He wrote music which some contemporary musicians complained was ‘unplayable’. He had no success with women (but an unfortunate habit of falling in love with his piano pupils) and always wished he had been able to marry. He certainly didn’t undervalue himself: ‘There are thousands of princes but only one Beethoven!’ If a piece was badly received, he blamed the listeners for not being cultured enough to understand it. His deafness started before he was thirty and grew worse, making normal conversation impossible for him and causing him to thump furiously at the piano in an effort to hear. The number of illnesses he had and the terrible suffering of his final illness, make hard reading. Yet when he was at his very weakest, he wrote some of his greatest works, including my favourites, the late string quartets. A difficult man but oh, a great one.

Once recovered from his horrible death and the grand funeral which thousands of Viennese flocked to, you find a postscript full of useful information. There’s a selective and descriptive account of Beethoven’s works, with recommendations of Suchet’s favourite recordings, a ‘cast of characters’ and a timeline of events. Suchet does commit what to me is the biographer’s cardinal sin, writing too often ‘we can imagine how…’, ‘almost certainly he…’ and so on. I was able to enjoy the book in spite of this annoyance, which says a lot. Thanks to Elliott and Thompson for sending me a review copy.
Collapse