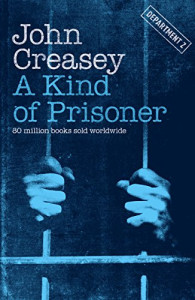 Perhaps, like me, you’ve read umpteen books yet never anything by the prolific John Creasey. I’ve just read A Kind of Prisoner (a Kindle 99p deal), one of his Department Z stories about the Secret Service. I was absolutely gripped by this from page one. Judy Ryall is alone in her isolated house and terrified by hearing knocking at the door. When she eventually opens it, she sees her husband, secret agent Alec, obviously very ill, who shoves an envelope into her hands, tells her what to do and disappears into the night with his captors. After this, things move fast. Judy is whisked away to a safe place and Department Z gets on the trail of the villains. The problem is that the enemy seems to be always one step ahead and to know all their plans. Some think Ryall is dead, others that he has been forced to talk. When the opposition acts on information Ryall could not have given them, it’s clear that there’s a traitor to be unmasked.

Today, the idea of an outfit anxious to get its hands on the plans for ‘our latest jet engine’ is old fashioned. Spooks these days have other concerns. Yet the book doesn’t read as out of date; it’s fast paced with many twists and turns and something new happening on almost every page. Not funny like Mick Herron, not as atmospheric as my old favourite Helen MacInnes but very enjoyable.
If this tempts you, you can get a free download of a Department Z story here, together with more information about the author.

By complete coincidence, a couple of weeks ago I watched an episode of Gideon’s Way on Talking Pictures. I now know that this series was based on Creasey’s Gideon of the Yard books. I liked the programme, which was quite new to me, because: it was produced in 1964, in black and white and showed genuine old-fashioned sixties style, that is, ordinary people, not London ravers. It even had mods and rockers. The script was poor but it was good social history.
Collapse